What Does Wireless 802.11 Mean To My Wifi Speed

The Wireless 802.11 standards employs a series of over-the-air modulation techniques using the same basic protocol. The most common standards are referred to as 802.11a, 802.11b, 802.11g, 802.11n and the newest, 802.11ac. The spectrum available for 802.11 networking varies by country and there are additional restrictions on power output for various configurations. 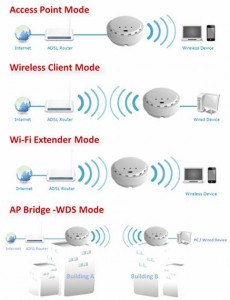 The 802.11a standard operates on 5 GHz and supports a maximum data rate of 54 Mbits/s with a real throughput of around 25 Mbits/s. There is a variation of 802.11a called “turbo mode” which is capable of 108 Mbits/s maximum data rate using 40 MHz channels instead of the standard 20 MHz channels. The 802.11a standard uses a modulation technique referred to as OFDM – Orthogonal Frequency Division Multiplexing.

The oldest standard is 802.11b which operates on 2.4 GHz, has a maximum data rate of 11 Mbits/s and a real throughput of about 5 Mbits/s. 802.11b suffers from considerable interference problems due to channel crowding and overlap. The 802.11b standard uses a modulation technique referred to as DSSS – Direct Sequence Spread Spectrum.

IEEE 802.11g extends the operation of 802.11b which also operates on 2.4 GHz by increasing the maximum data rate to 54 Mbits/s and typically achieves throughput of about 25 Mbits/s. However, 802.11g also suffers from interference. Similar to 802.11a, 802.11g uses a modulation technique referred to as OFDM – Orthogonal Frequency Division Multiplexing.

IEEE 802.11n further extends the operation of 802.11g and 802.11a by increasing throughput, reach and reliability through the use of numerous protocol enhancements. Among these enhancements, the most visible improvement comes through multiple streams or chains of data transmitted between devices, requiring multiple antennas or at the least, dual polarity antennas on each end which together greatly improve throughput. MIMO is the technology that makes this possible. The expression MIMO (multiple in multiple out) is a reference to these multiple radio/antenna paths. A 300 Mbps Wireless N router contain two transmit and two receive antennas, while 450 Mb/s contain three and 600 Mbps router contains four pairs, respectively. 802.11n operates on either 2.4 or 5 GHz bands.

Wireless N speeds also vary depending on the number of radios and antennas a device uses. Wireless N speeds can be 150, 300, 450 or 600 Mb/s. The speed improvements occur because these Wireless N devices use multiplexing radios and extra antennas operating at the same time over different spatial paths. The expression MIMO (multiple in multiple out) is a reference to these multiple radio/antenna paths. A 300 Mbps Wireless N router contain two transmit and two receive antennas, while 450 Mb/s contain three and 600 Mbps router contains four pairs, respectively. But once again to get the full speed advantage both Wireless N devices have to have the same number of radio/antennas pairs to get this speed improvement.

At its core, 802.11ac is essentially an updated version of 802.11n, which itself introduced some very exciting technologies that brought massive speed boosts over 802.11a and g. Whereas 802.11n had support for four spatial streams (4×4 MIMO) and a channel width of 40MHz, 802.11ac can use eight spatial streams and has channels up to 80MHz wide, which can be combined to make 160MHz channels. This means that 802.11ac (read 802.11n boosted) has 8x160MHz of spectral bandwidth to play with, vs. 4x40MHz — a massive difference that allows 802.11n to squeeze vast amounts of data over radio signals.

The theoretical max speed of 802.11ac is eight 160MHz 256-QAM channels, each of which are capable of 866.7Mbps — a grand total of 6,933Mbps, or just shy of 7Gbps. That’s a transfer rate of 900 megabytes per second. In the real world, due to channel contention, you probably won’t get more than two or three 160MHz channels, so the max speed comes down to somewhere between 1.7Gbps and 2.5Gbps. Compare this with 802.11n’s max theoretical speed, which was 600Mbps. 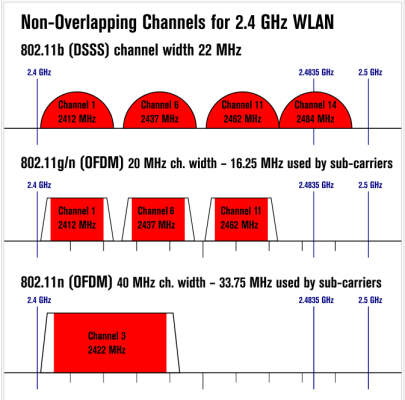 Wireless devices suffer most from interference. Interference is the phenomenon that occurs when two wireless devices in close proximity are able to unintentionally receive each other’s transmissions. A good analogy of this is a crowded room. When everyone is talking at the same time, it is hard to tell who the speaker is and even harder to hear what they are saying. The same happens when many wireless devices are all trying to communicate at the same time.

In the 2.4 GHz spectrum, there are many devices that share a very small section of the unlicensed spectrum with overlapping channels and therefore noise or interference can happen. The standard channel width for 802.11b is 22 MHz and with the spectrum available and only 11 available channels in the U.S.A for example channel overlap occurs. Because of the channel spacing, only three channels do not overlap with each other. Overlap means that the centre frequency of the channel and the 11 MHz of spectrum that is used on either side crosses over the adjacent channels. For example, channel 1 on 802.11b stretches up to overlap with channel 2,3,4, and just meets channel 5 with no guard band. Channel 6 is the next available channel. Because of this, if you are using 802.11b with multiple devices, the only available non-overlapping channels are 1, 6 and 11. Any other combination of channels could cause your devices to interfere with others. Cordless household phones also use these same frequencies.