Once a radio waves are created they propagates freely in space at the fixed speed of light in a direction which we use antennas to emphasise. We use Antennas to focus these EM waves to transfer the maximum energy to the receiving antennas for example in radio or Wifi.

The electric and magnetic fields are are always orthogonal to each other and to the direction of propagation which means that in normal arbitrary x,y,z coordinates for example the Electric field (E field) moves in the vertical x,y plane from left to right while the corresponding magnetic field (B field) moves in phase in the x,z plane also form the left to the right.

In effect the two wave components move in the same direction and reach their minimum and maximum amplitudes at the same time but are separated by a rotational moment of 90 degrees in space along the direction of travel.

If you imagine this radio wave coming towards you then the wave would appear as a cross with the E field in the vertical direction and the B field in the horizontal direction. By convention the E field component of a EM wave is used to express the property of polarisation of an radio wave.

The direction of the E field defines Polarisation

So as the E component in our example is in the vertical direction the wave is said to have vertical polarisation. If the wave source was rotated through 90 degrees the E field would appear in the horizontal direction and as such would be horizontally polarised. 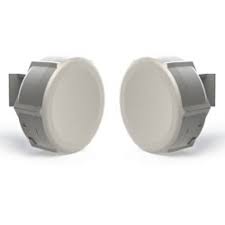 In circular polarisation the EM wave propagation takes the form of a spiral pattern proceeding in a clockwise or anticlockwise direction dependent on the antenna design. The E and B field are still perpendicular to each other but they are now not in phase but are 90 deggres out of phase. This is what creates the cyclic cork screw pattern. If you could see this pattern in a plane perpendicular to the direction of travel of the wave as it passes towards you it would appear as a rotating point in a circle going clockwise or anticlockwise depending on the direction of polarisation.

A common problem with all EM wave transmission is interference between signals propagated from the same source taking different paths to the receiving antenna. This results in fading of the signal as constructive and destructive interference takes place as a result of phase differences over the various signal paths.

When satellite circular polarised signals propagate through the atmosphere they hit the earth surface at points close to the receiving antenna. But on doing so their polarisation is reversed. So if the receiver antenna is left hand polarised (LHP) the reflected signals will be right hand polarised (RHP) and will cause the minimum interference with the direct point to point antenna signal which is LHP. This is much more effective a polarisation scheme than either horizontal or vertical polarisation for satellite applications especially where the signal levels are low due to the signal power available at such long distances.

Antenna Types and their Properties

Antennas can be viewed as electromagnetic wave radiators and their ability to point or have directivity is a design consideration for the application in mind.

An Isentropic Radiator is a theoretical point source radiator that sends out electromagnetic waves. It radiates equally in all directions and is used to measure real life antenna radiators against. By comparing the signal energy at a distance from the theoretical radiator with the real life antenna radiator we get a measure of how much more signal energy is present by its presence the real antenna.

Where specific and narrow directivity is required we think of the antenna propagating electromagnetic waves in narrow beams which means greater wave energy at longer distances in the direction of the beam. 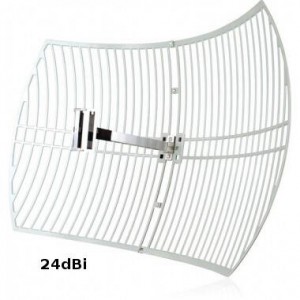 The ratio of the power received because of the antenna compared with this isentropic radiator is expressed as antenna GAIN (in decibels as DBI). An antenna of this form is called a directional antenna. Here are some example Yagi antennas and other directional Parabolic and Grid Antennas can be seen here 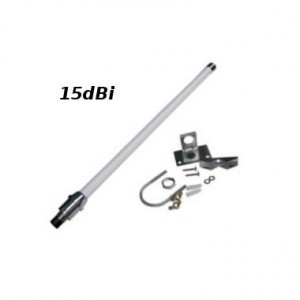 If your design purpose is to increase the signal strength in a circular pattern around the antenna so that the signal can be propagated in any direction around the compass we would use a omni-directional antenna, Here are examples of Omni-Directional Antennas. The antenna design is intended to provide signal gain in a similar way. There are many antenna designs of this type and they are normally vertically polarised.

The following example extract is taken from a directional grid antenna specification and we will use it here to explain various antenna properties.

Antennas are designed around the characteristic wavelength of the carrier frequency they are designed to use. The physical dimensions are dictated by this wavelength. In practice they are tuned to extract as much energy from an incoming electromagnetic wave as possible as well as propagate EM waves with maximum efficiency in mind. We discussed this above as the antenna Gain property.

The extent to which the radiation pattern propagates from an antenna is of interest as directivity and application issues matter. We want to know for instance that a receiving antenna will be able to collect a signal from a transmitter by being in its radiation foot print.

By taking horizontal and vertical sections through the antenna radiation pattern we are able to define points that represent half power points where the effective signal power is half that of the the maximum signal power at the same distance from the antenna. These points define the limits of the effective beam from the antenna. There is a horizontal and vertical beam defined this way but they can have different values. You want all your radio links to be contained within these limits. These limits give useful information when you are considering antenna alignment.

In all Antenna systems the design goal is to maximise the effective signal power that can be transmitted or received.
In reality there are losses due to mismatching between the impedance of transmission lines feeding the antenna and the antennas effective impedance. If they are not matched a proportion of the transmitters power is reflected back from the antenna and the combination of the forward transmitter wave and the reflected wave combine to form a standing wave within the transmission line. This is essentially lost power and a measure of this lost power is defined by the VSWR (Voltage Standing Wave Ratio).

At some points along the line the two waves interfere constructively, and the resulting amplitude is the sum of their amplitudes, where k is the reflection coefficient:

At other points, the waves interfere destructively, and the resulting amplitude is the difference between their amplitudes:

In practice VSWR is always greater than 1 as no system is perfect and typical values of VSWR of 1.5 or less are normal. A VSWR of one would imply no power loss and no reflection wave.

Front to back Ratio

The radiation patterns of practical antennas are by no means ideal in the close field near the antenna where substantial interference takes place along near and adjacent radiation paths. It is only in the far field at some distance from the antenna that the radiation patterns become more uniform and symmetric. A common feature of the near field radiation pattern is a lobe in the pattern directly opposite the front beam of the antenna pointing and radiating power backwards. A measure of the antenna efficiency can be expressed as a ratio of the power in the main front lobe compared to the lost power in this back lobe. The ratio is normally expressed in decibels. In our example above our antenna sends out roughly 1000 times more power on its front lobe than it does on the back lobe.

Summary of Polarisation and Antenna alignment

What we see from the above is that the best way to capture the most signal strength from a polarised EM wave is to set a receiving antenna in the polarisation of the incoming wave. This is why antenna polarisation is expressed as a property of antennas. Also bear in mind that simple directional antennas can be both vertical and horizontally polarised simply by orientating the antenna by turning it through 90 degrees. In addition we have seen that impedance matching is very important for efficiency as is knowing the radiation footprint of the antenna for best alignment and location. We have seen that the radiation patterns for directional and omni-directional antennas are quite different as they address different application needs.