How Do Wifi Antennas Work 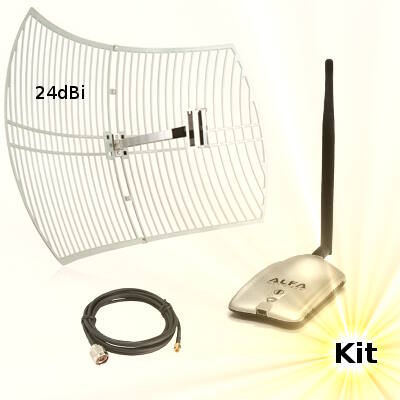 How Do Wifi Antennas Work for Indoors and Outdoors

When we ask how do Wifi Antennas work we should think that Wifi Antennas are like any other antennas in that they are designed to focus radio waves in a particular pattern in space. The physical characteristics of a given antenna are mainly determined by the wavelength and corresponding frequency for which the antenna is designed. The only real difference between antennas used for indoors and outdoors is their signal gain and physical characteristics. Indoor antennas are normally physically smaller, have less signal gain and are more compact covering smaller internal areas. Outdoor antennas are generally larger, have higher gain, have greater coverage area and are weather proofed for outdoor use.

All kinds of radio antennas operate at different frequencies but Wifi Antennas work on either 2.4 Ghz or 5 Ghz bands. Sometimes antennas are designed to be broad band and provide a reasonable gain over a range of frequencies.

Antennas are normally passive devices and do not contribute any extra signal power. You can think of them as lenses focusing radio wave energy in specific patterns. One way to visualise this is to imagine a toy balloon 90 percent full of air. The normal ballon shape is roughly circular and the air inside represents all the energy in free space that would be transmitted by an antenna.

When you squeeze the balloon in certain ways you can deform its shape and make it extend in a variety of directions from cigar shapes to flat round disk like shapes.

What we achieve when we squeeze the balloon is a transformation in its shape in different directions without changing the total amount of air inside. By deforming the balloon we can reach points in physical space that were not accessible before the balloon was deformed. In this way the balloon analogy is like an antenna designed to extend the signal reach in a specific pattern and direction using the same signal amount of energy just like the same amount of air inside the ballon. Without the antenna the signal energy measured at some point away would be much less if we imagine a single point source radiating the signal. This is what antennas do and how they work.

By careful design antennas are produced for differing applications. An antenna that works by producing a cigar shaped signal footprint would be useful for concentrating the signal energy in a point to point direction. They achieve this by sending the signal further in the direction between the two points and less to the sides. This kind of antenna is called a directional antenna.

If you wanted to receive a signal all around the antenna. That requires a different wifi antennas design. Perhaps when you are sharing Wifi in a spread out community and you want the signal evenly spread out with a footprint just like our flattened balloon. This type of antenna is called an omnidirectional antenna and works by spreading signal evenly in a horizontal direction perpendicular to the antenna if it is help upright. The true signal pattern is more like a doughnut shape and surrounds the antenna symmetrically.

The ability of an antenna to send a signal in specific directions is called the antennas directivity. A measure commonly used to express this directivity is called antenna gain. Antenna gain is normally measured in units of dBi (deci-bells isentropic), a logarithmic scale which is commonly used. This scale has the property that for every 3 dBi increase in antenna gain this effectively doubles the signal power received at a given point. This means an antenna of 18 dBi will deliver 4 times the power of a 12 dBi antenna at the same measuring points.

In order to explain more about Wifi Antenna properties here is typical directional antenna specification.
We shall explain each of the terms used in this specification.

An ideal antenna would be one that received signals at the required frequencies and rejected all others. This however is hypothetical as no such antenna exists. The range of frequencies for which an antenna is designed to provide its design signal gain is known as its bandwidth.

Normally the bandwidth or frequency range considered in the bandwidth are those which receive 3 dBi less gain than the maximum antenna gain which is at the centre frequency. So the frequencies at the cut off points either side of the maximum gain centre frequency are each sent with half the power of the central frequency. The more clearly defined this central signal range and the sharper the cut off in gain the better the antenna as the unwanted signals constitute signal noise which can effect receiving performance.