How a Wireless Range Extender Works 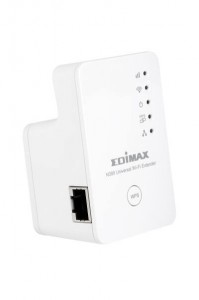 In this article we turn our attention to how a Wireless Range Extender Works and the role of a Wireless Repeater. Often called a Wifi repeater or booster. To find out about data packets, packet switching networks like the Internet and the role of routers see our article wifi routers what are they and what they do

The usual domestic Wifi ADSL/Router supplied by your service provider gives a degree of coverage in and around its location. This is mainly on one floor level for example and often provides partial coverage elsewhere in your home or office.

In these situations the signal quality in other rooms and floors may not be good enough. It may not provide the desired link speed needed for your needs. Wireless devices operating the 802.11 b/g/n protocols effectively lower their link speed as the signalling error rate increases due to poor signal levels. The Wireless Range Extender provides a solution to this problem.

It all depends on what link speed is acceptable to your needs. If its a question of any link speed at all verses none then a dedicated Wireless Range Extender is a good option. Bear in mind that the role of a wireless range extender can be accomplished by many modern Wifi routers which can operate in various wireless modes. But they will cost more to buy unless you have one lying around that you can configure just as a Wireless Range Extender.

The speed at which wireless devices like phones and wifi connected computers operate is effected by the sensitivity of the WIFI devices they use. A device operating on the 802.11 n protocol with possible speeds of up to 300 Mb/s will require a good input signal level to achieve this maximum speed.

The sensitivity of these devices are stated in their specifications. Link speeds are quoted against the minimum signal levels required to achieve this speed. In effect these devices will downgrade their link speed as the signal level decreases in relation to the channel noise. This is done to minimise the signal error rate which increases with poor signal to noise ratios.

How a Wireless Range Extender Works

How a Wireless Repeater Works

It is also possible to provide a Wireless Range Extender by using a Wireless Repeater which use their wireless interface in half duplex (one direction at a time). First receiving packets in one time frame and retransmitting these packets wirelessly with more signal power in the next time frame. This extends the range of the original WLAN from your base router. The Wireless Repeater is acting as a wireless client bridge. But instead of just wirelessly bridging a wired network as normal it also provides an AP of its own. Thus bridging wireless clients over another wireless link to the base LAN.

It is important to note that this process of wirelessly receiving and retransmitting packets in half-duplex induces a link speed loss of about 50% as it take twice as long to send the same packets as it would if it were not repeating. This will not apply to the wired devices connected to the repeater if any.

We have created a review of one very compact and practical Wireless Range Extender. This device has been on continual test and proved a very affordable and excellent solution for extending Wifi at home.

Access points (AP’s) in Wifi terms operate as network bridges passing network packets from the wired side of the device to the wireless side of the device and visa versa. An AP is a wireless bridge because it has two interfaces with different protocols on each side of the interface. The AP functions as a link level wireless bridge switching device only and normally no packet routing takes place. A router can be configured to act as an AP wireless bridge and do its normal routing function at the same time. A wifi router for example has a wired side connected to a WAN (ADSL/Cable modem), a wired LAN side switch and a wireless (WLAN) interface forming part of this LAN. So a Wifi router adds a packet routing function on top of the general wireless bridging function of an AP.

A Wireless Range Extender is identified by its (BSS + SSID + BSSID + MAC) Identities. When a device is configured to provide a unique AP for a BSS (Basic Service Set – a number of machines forming a cell) the name of this AP’s is called a SSID (Service set Identifier). It is a arbitrary character string and is broadcast to wireless clients wishing to join the WLAN.

All wireless devices have a unique and personal MAC number which identifies a particular physical device from any manufacturer. At the physical layer of data transfer these MAC identifiers are used for directing packets to destination devices.

Many wireless routers can be configured as access points, wireless clients, repeaters or wireless bridges.

When the router is configured as a wireless client bridge it connects its LAN side wirelessly to local devices who then become clients on the base station WLAN via its access point (AP). In this case the router behaves like a wirelessly connected wireless switch and all devices are effectively on the same LAN segment as the base AP router.

A router can be configured to act as simple wireless client to the main router AP. Perhaps you have two separate wired LAN segments in separate buildings with one subnet providing an Internet gateway like your main house router. By configuring your router in the second building as a wireless client of the AP provided by the main router in the first building you are giving access to the Internet through a wireless link to all connected clients on the second building subnet.

Normally clients of routers configured as wireless client bridges and/or repeaters join the same LAN segment as the base station router. The base router provides all the IP addresses for all clients with its DCHP server and all clients can potentially see each other. This is because the routers wireless interface is connected to is LAN side.

If the wireless client routers is configured to connect its wireless interface to its WAN side then the local LAN it is serving can be on a different LAN segment than the main LAN. In this case local clients can access the Internet via the router but are provided IP addresses locally by the routers own DCHP server.

As a Wireless Range Extender the router configured as a wireless client interfaces to its own LAN segment providing normal router functions like acting as a DCHP server and doing NAT (network address translation from its WAN side to its LAN side. So you end up with separate LAN segments but devices/hosts on each segment can access the Internet. This coupling could be achieved in a large building to wirelessly link computers distributed in different parts of the building giving access to the Internet. In this case however clients on different LAN segments cannot see each other

Here are some Examples Products and Reviews offering these features