Radio Waves are one example of electromagnetic waves in general. The essential thing to realise is that EM waves naturally occur. We are very familiar with them in our every day lives. They all travel at the speed of light in a vacuum but differ in the wave lengths they have. We have wave lengths from the very small, like x-rays to very long waves like infrared waves used in electric fires. In between we have visible light, micro-waves, radio waves and so on. In fact there is a continual spectrum of electromagnetic waves which is called the Electro magnetic Spectrum. 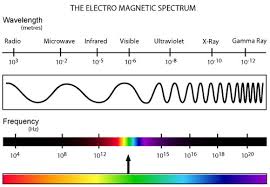 In our article What is Electricity we discussed the concept of electric and magnetic fields and induction by the passage of electric currents. These currents are the results of electrons carrying charge moving in a conductor sympathetically with the applied electric field. If the field changes with time for example, when a carrier frequency feeds an antenna via a transmission line. Then the excitation by the applied electric field results in the release of photons at the excitation frequency causing the electromagnetic wave.

This propagating wave was first postulated by James Clerk Maxwell who famously defined the equations of a wave consisting of a magnetic and electric field moving in free space at the speed of light. This wave is called an electromagnetic wave because it combines both an electric and magnetic field.

It forms the basis of the electromagnetic spectrum. This wave property is responsible for all radiation in free space and covers radio waves, infrared, visible light, ultraviolet, x and gamma ray radiation. The only difference associated with these different forms of electromagnetic waves (EM waves) is their individual wavelengths and associated energies. So in fact they are all waves obeying Maxwells equations which was a truly great discovery at the time way back in 1864. This produces the useful and simple equation…

The shorter the wavelength the higher the energies of the photons. Which is why x rays are dangerous in excessive dosses as their energies can cause damage to human cells leading to potentially dangerous cell mutations.